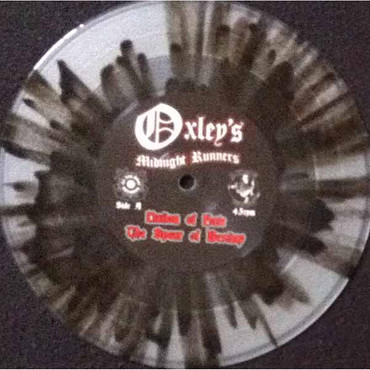 PRESSING INFORMATION 300 Red splattered Vinyl 300 black splattered Vinyl TRACKS Nation of Hate Spear Of Destiny We Are Legion Oi! the Boat and Randale Records are proud to offer this highly anticipated debut release from OXLEY\'S MIDNIGHT RUNNERS. Featuring Mike from the Fatskins, Dave and Jeff from 90 Proof and Lars from the Old Firm Casuals/Rancid- this 7\" offers three tracks of brilliantly understated American Oi! that will command center stage on your turntable\'s rotation. The songs are as poignant as they are catchy, \""Nation of Hate\"" laments the socio-economic apathy turned tacit cruelty in modern society. \""Spear of Destiny\"" is centered on the mythical \'holy lance.\' The focus is not only the lore affixed to holy relics, but the atrocities that humanity have been compelled to carry out under the veil of their significance. The record closes on the AA side with the title track, \""We Are Legion,\"" a song with chilling guitars and a big beat that demands the the listener to look into the darker parts of humanity and themselves. The title track draws deep on the stark disparities of the human condition and will leave everyone who hears it screaming, \""WE ARE LEGION!\"""
– Es ist noch keine Bewertung für Oxleys Midnight Runners- Single- splatter- Invasion- schwarz abgegeben worden. –