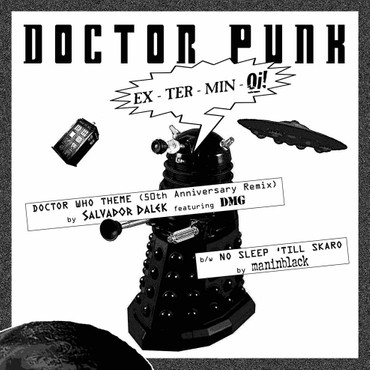 Doctor Punk is a hard-edged hooligan tribute to Doctor Who. It is by DMG (the exciting new spin-off group from the legendary Gonads) and radical New York electro-Oi band Maninblack. Released to mark fifty years of the much-loved British TV sci-fi series, the split single features ‘Doctor Who Theme (50th Anniversary Mix’) by DMG and Maninblack’s ‘No Sleep Till Skaro.’ It will be released in November 2013 to coincide with the TV show’s fiftieth anniversary celebrations. *DMG will launch officially in 2014. The band is described as a “harder, nastier, more punk rock” version of the Gonads with different personnel. Full details will be announced in January. *MANINBLACK is the brainchild of André Schlesinger, formerly of the seminal US Oi! band The Press. Maninblack mix Oi with synthesisers and samples. Singer André Schlesinger explains: “We’ve taken 1977 UK Punk and Oi! influences and hit them with a Dalek's plunger.” *The Doctor Who theme is one of the most iconic TV signature tunes in history. It was written by Ron Grainger in 1963. 400 copies
– Es ist noch keine Bewertung für Doctor Punk- Single- Limited Tardis blue abgegeben worden. – 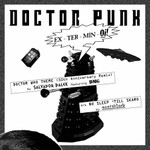